If you’re trying to find the most convenient coffee makers possible, Keurig is usually a great option. Spend even the smallest amount of time looking at Keurigs, though, and you’ll see that there are so many choices. How do you decide which is better for you?

The Keurig K Slim and K Mini are two examples of coffee makers that are specifically designed for use in homes with limited space. We’ll help you choose which one you should get by comparing them here.

We’ll be discussing the following: 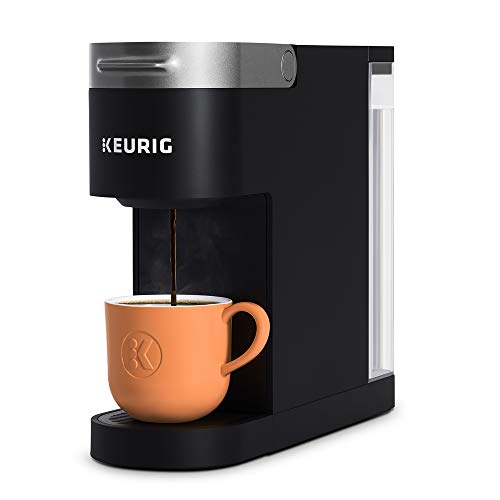 When a small size is of the utmost importance, the Keurig K-Mini is a solid contender. It’s incredibly slender, thanks to its single-serve water tank that reduces its size. Get the Keurig K-Mini if you need a coffee maker that’s as small as possible.

If a small size is what’s most important to you, be sure to also take a look at our Keurig K Slim vs Mini Plus comparison. Both the Keurigs in the comparison are small, and we compare them both in detail to help you decide.

Keurigs are well-known for their pods, which are called K-Cups. A coffee pod is a capsule containing a single serving of coffee. They’re generally great for beginners because you don’t need to worry about measuring out or grinding your own beans with them.

There are a few reasons why you might prefer to use grounds. The following are a few examples of reasons you would rather use coffee grounds:

If any of the aforementioned things applies to you, you’ll be pleased to hear that these coffee makers can handle coffee grounds, too. All you need to do is purchase the My K-Cup Reusable filter.

Even if you’re a forgetful type of person, you’ll never need to worry about accidentally leaving these Keurigs on. Both have a convenient failsafe feature called Auto Off.

When either one of these Keurigs are left on and no one has used them to brew for a specific amount of time, they will turn themselves off. You’ll never need to worry again as you walk out the door whether or not you left your coffee maker on.

Beneath the dispenser on either Keurig, there’s a cup stand that also functions as a drip tray. When you remove your cup after brewing some fresh coffee, the drip tray catches any straggling drips that may leak out of the dispenser.

These drip trays can also be removed to make extra space beneath the drink dispenser. With the drip trays pulled off, you can fit a significantly larger travel mug up to seven inches tall on either Keurig.

Unlike traditional coffee machines that brew entire pots, the Keurig K-Slim and K-Mini are both designed to brew a single cup at a time. While this could lead to lines forming in place where large groups of people need a drink, there are a few reasons it could be preferable in a home setting.

For starters, single-serve brewing helps cut down on waste. When you brew a whole carafe of coffee, you risk having leftovers that no one on wants to drink. This isn’t really an issue when you’re only brewing one cup a time as you want one.

Additionally, you have more flexibility this way. If you brew a pot, you only have a large amount of a single type of coffee that not necessarily everyone wants. Making one cup allows you to choose exactly what you need, and friends or family brewing a cup after you can do the same thing for themselves.

One of the largest differences between the K-Slim and the K-Mini is the size of their water tanks. More water essentially means you can brew more drinks before you need to refill your coffee machine. Thus, if you’re going to be sharing your Keurig with friends and family, you might want a larger water tank.

The K-Slim has the larger water tank of the two Keurigs. It can hold up to 46 ounces of water, which is plenty to make a few cups in a row.

On the other hand, the K-Mini has single-portion water tank. It can hold up to 12 ounces depending on the size of the drink you want to make. However much water you add in is how large the beverage you’re brewing will be, and you must add water every single time.

Overall, the size of these Keurigs is pretty similar. There is one key difference here, though: their depth.

Naturally, the K-Slim’s larger water tank means it takes up just a tiny bit more space. It’s approximately 15 inches deep and will stick farther out on your countertop than the K-Mini will.

In comparison, the K-Mini is a little over 11 inches deep. This means it clears up a bit more of your counterspace.

Are you picky about the appearance of your appliances? In that case, you’ll likely prefer the Keurig K-Mini, which is sold in a few different colors.

Frankly, the color of the Keurig isn’t going to impact its everyday use. But it can be important to those who want their appliances to match, especially if they’re investing in said appliances.

The Keurig K-Slim, unlike the K-Mini, has a removable water reservoir. Removing the water tank makes it easier to clean and to refill.

Think about it: if the water tank were permanently attached to the machine, you’d need to haul it around to clean it or refill it. If you’re not willing to carry it, you’d have to rotate it to be able to access the tank for washing and adding water.

Fortunately, this isn’t the case with the K-Slim. You can just slide out the tank and carry it to your sink for an easy refill or wash.

Coffee novices will probably sigh in relief when they open the box of their Keurig K-Mini and see it only has a single button. Too many buttons and settings can be overwhelming for people who are inexperienced.

This is what makes the Keurig K-Mini so simple. Rather than having to fuss with an array of settings, users only need to add water, insert their pods or grounds, and then press a single large button on top. Making a quick cup of coffee could not get any easier.

Maintaining even the most basic coffee makers can get confusing. Even if you’re familiar with the ins and outs of coffee machine maintenance, you might forget to actually perform the maintenance now and again.

The K-Slim, fortunately, won’t let you forget. It has an add water and descale light that will come on whenever it needs more water or to be descaled. This way, you’ll never be caught off guard by the Keurig’s needs and you’ll help promote its longevity with regular care.

If you haven’t made up your mind by this point, you’re probably still asking yourself which Keurig is better for you in particular. To determine that, let’s look at a few circumstances in your life that could make one or the other more suitable.

Let’s start with space. Are you particularly short on room in your kitchen? Then the K-Mini, true to its name, might be the better choice simply because its petite water tank helps it squeeze in even better.

The K-Slim is still quite small, but it’s a bit larger than the K-Mini.

Next, think about looks. Those who have kitchens with a particular color scheme or who just want a coffee maker that’s stylish-looking will probably want to spring for the K-Mini. It’s available in a few different colors, all of which are attractive.

Then consider who’s going to be using the coffee maker. Is it just you, or do you anticipate sharing it with friends and family? If the latter is true, then the K-Slim outpaces the Mini in this comparison due to its larger water tank.

Finally, factor in your familiarity with coffee machine maintenance. If you’re the kind of person who will forget to add water or descale your machine, the K-Slim will again be the wiser choice because of its indicator lights.

Go with the Keurig K-Mini if you’re looking for a purely personal coffee maker or need the most compact option available due to limited space.

However, you should pick the K-Slim if you anticipate needing to make drinks for other people or you’ll be using the machine more often.

You can find more information about both these Keurigs here:

Keurig K-Elite Vs K-Elite C: Which is Better?

Keurig K-Mini vs K15: Which is Better?

Keurig K Supreme vs Mini: Which Keurig is Better?

Keurig K Supreme vs Nespresso: Which One Should You Buy?

Keurig K Supreme vs K Classic: Which One Should You Choose?

Keurig K Supreme vs Supreme Plus: Which is Better?

Keurig K Supreme vs K Elite: Which One is Right for You?

Mr. Coffee vs Keurig: Which Should You Pick?

Keurig K Slim vs K Mini: Which is Better?

Keurig K Slim vs K Compact: Which One Should You Buy?

Keurig K Slim vs Classic: Which One Should You Buy?

Keurig K Slim vs Mini Plus: Which One Should You Pick?

Keurig K Café vs Special Edition: Which One Should You Buy?

Keurig K Café vs K Latte: Which One Should You Buy?

Keurig K Café vs K Elite: Which One Should You Buy?

Keurig K Cafe vs Nespresso Vertuo: Which One Should You Buy?

Keurig K-Elite vs Ninja Coffee Bar: Which is Better?

Cuisinart SS-15 vs Keurig K-Duo: Which One is Right for You?

Keurig K Duo vs Hamilton Beach Flexbrew: Which is Right for You?

Keurig K-Elite vs Delonghi Nespresso: Which is Better?

Keurig K-Mini Vs K-Compact: Which is Better?

Keurig K-Elite Vs K-Compact: Which is Better?

Keurig K-Elite vs K-Duo: Which is Better?

Keurig K-Elite Vs K-Classic: Which is Better?