Trying to decide whether you should get the Keurig K Café or the Special Edition? Both are fantastic ways of making lattes and cappuccinos accessible from home for beginners.

Furthermore, compared to an espresso machine, they’re pretty affordable. However, when you look at them both, it’s hard to tell what the differences are, and therefore how you know which one to choose.

In this guide, we’ll be comparing these two Keurigs so you’ll be able to choose wisely. Here’s what we’ll cover:

Trying to decide whether you should get the Keurig K Café or the Special Edition? Both are fantastic ways of making lattes and cappuccinos accessible from home for beginners.

Furthermore, compared to an espresso machine, they’re pretty affordable. However, when you look at them both, it’s hard to tell what the differences are, and therefore how you know which one to choose.

In this guide, we’ll be comparing these two Keurigs so you’ll be able to choose wisely. Here’s what we’ll cover:

Convenience might as well be the middle name of the Keurig K-Café. By just pushing a couple buttons and waiting a few minutes, you’ll have a latte or cappuccino that almost makes you feel as if you got it from a barista. This is a great pick for you if you want an easy milk-based drink or a coffee machine you can share with the family. 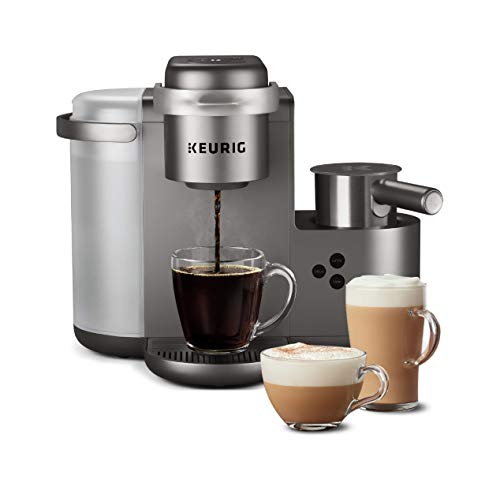 If you’re worried about the durability of the Keurig K-Café because of its plastic components, you’ll love the K-Café Special Edition. On top of all the same convenient features of the original, you’ll get a gorgeous nickel-colored finish with a metal handle and drip tray. This beautiful coffee machine is the one for you if you’re looking for convenience, ease of use, and longevity in a Keurig.

The biggest aspect that sets these coffee machines apart from others is their milk frother. Instead of being restricted to your basic cup of joe, you have the possibility of making lattes or cappuccinos.

The frothers also come with settings that you can use to tweak your drinks. You can press the cold button, for instance, to make cold milk foam, which is great for topping an iced latte.

Additionally, you can choose latte or cappuccino options. The latte option will give you more foam and milk, while the cappuccino one will give you less. Frankly, it won’t be quite the same as the kind you’d get from a real steamer on an espresso machine, but it’s still decent.

With most other coffee machines, there isn’t much you can do to adjust the strength of your drinks. They tend to have one constant setting, which isn’t always strong enough in flavor.

Both these Keurigs rectify this issue with their Strong button. When you choose Strong brew, it will brew a more concentrated cup, resulting in a much bolder flavor.

Every coffee machine needs a water tank, otherwise it wouldn’t be able to brew coffee. The size of the water tank directly impacts your day-to-day use. With these Keurigs, you’re getting a 60-ounce water reservoir.

Basically, a larger water tank means you can make a greater number of drinks before you need to add more water. This is ideal when multiple people are going to be using the machine, because it means you won’t need to stop for refills as much.

Of course, if you’re the only person who’s going to be using it, this aspect might not matter as much. It just leads to you not needing to refill the water tank every day.

Beneath the dispenser on either coffee machine, you’ll find a drip tray. It has multiple uses.

First, it catches any drips from your dispenser. That’s less for you to have deal with cleaning up later, which is a thoughtful touch.

Second, the drip trays work as a stand for your cup. When you remove the drip trays, which you can do by sliding them out, you make more room beneath the dispenser for taller cups.

They’re also so easy to clean. Because you can slide them off, you can wash them quickly in your sink, or wherever you’re most comfortable.

The K-Café and Special Edition will both give you choices on how you brew your drink when it comes to pods or grounds.

Beginners will likely love pods. They come in a huge range of flavors, and they include pre-measured portions of grounds. You can just choose the flavor that you’re craving and put it in your Keurig to brew.

Experts, however, will appreciate that you can use your own coffee grounds. This allows you to choose a blend you might not be able to find a K-cup pod for, such as blends from local cafes. Also, freshly ground coffee leads to a stronger flavor, which is the preference for any afficionado.

Speaking of pods, both Keurigs are compatible with K-cup pods. That compatibility gives you an amazing breadth of options to choose from.

No matter what kind of flavors you like, you can find a pod that satisfies your preferences. You can even find pods for other hot drinks, such as tea and apple cider.

The average coffee machine requires you to go through a warm-up time before you can set it up to brew a drink. If you’re in a rush, that can be a hassle, because you don’t have time to hover over your coffee machine while you wait for it to heat up.

This waiting time is a thing of the past with both these Keurigs. They have a feature called Smart Start. When you turn them on, they still need to warm up, but you can input your drink settings before they’ve finished heating up.

Then, while the machines finish getting up to temperature, you can attend to other matters. Your Keurig will brew the drink you chose automatically once it’s hot enough.

Truthfully, there are not a lot of differences between these two K-Café models, but one of the most obvious differences is the nickel finish on the Special Edition.

The nickel finish is purely aesthetic. It’s simply a gray color that makes it look a little sleeker. It has no influence on the actual function of the Keurig.

In comparison, the original K-Café is a dark black color with gray accents on the front and handle. Again, the color has no impact on the use of the Keurig. If anything, you could argue that it shows coffee and milk splatters, but the nickel finish could do the same.

Whether the Special Edition’s nickel finish will have any influence on your decision is up to you. The color is just a personal preference, or based on the décor in your home if it’s important for your appliances to match.

The second difference between these Keurigs is the metal handle and drip tray on the Special Edition. For the original, these components – as well as pretty much all parts of the machine – are made from plastic.

This can raise some longevity concerns. Obviously, plastic parts feel cheaper, and are prone to cracking and breaking with age.

Because of this, you might appreciate the added durability of the Special Edition’s metallic handle and drip tray. Beyond the durability, they give the machine a touch of luxury that could factor in as a personal preference.

Which One Should You Buy?

We think choosing between the Keurig K-Café and Special Edition is surprisingly easy. For the most part, the differences between them are aesthetic, so it will likely come down to which one you think is better-looking.

Of course, you could also say that the metal handle and drip tray add some durability to the Special Edition. The original, in comparison, is made almost entirely from plastic (with the exception of the frother).

Cost could also be a factor worth considering. Like Special Editions of anything else, you’ll generally have to pay more for the K-Café Special Edition.

Our suggestion is to go with the K-Café if you just want a basic coffee machine that can make you milk-based drinks.

The only reason to choose the Special Edition is if you like the nickel color more and the metal accents. In all intents and purposes, it otherwise functions exactly the same as the original.

You can check out these Keurigs here:

Keurig K-Elite Vs K-Elite C: Which is Better?

Keurig K-Mini vs K15: Which is Better?

Keurig K Supreme vs Mini: Which Keurig is Better?

Keurig K Supreme vs Nespresso: Which One Should You Buy?

Keurig K Supreme vs K Classic: Which One Should You Choose?

Keurig K Supreme vs Supreme Plus: Which is Better?

Keurig K Supreme vs K Elite: Which One is Right for You?

Mr. Coffee vs Keurig: Which Should You Pick?

Keurig K Slim vs K Mini: Which is Better?

Keurig K Slim vs K Compact: Which One Should You Buy?

Keurig K Slim vs Classic: Which One Should You Buy?

Keurig K Slim vs Mini Plus: Which One Should You Pick?

Keurig K Café vs Special Edition: Which One Should You Buy?

Keurig K Café vs K Latte: Which One Should You Buy?

Keurig K Café vs K Elite: Which One Should You Buy?

Keurig K Cafe vs Nespresso Vertuo: Which One Should You Buy?

Keurig K-Elite vs Ninja Coffee Bar: Which is Better?

Cuisinart SS-15 vs Keurig K-Duo: Which One is Right for You?

Keurig K Duo vs Hamilton Beach Flexbrew: Which is Right for You?

Keurig K-Elite vs Delonghi Nespresso: Which is Better?

Keurig K-Mini Vs K-Compact: Which is Better?

Keurig K-Elite Vs K-Compact: Which is Better?

Keurig K-Elite vs K-Duo: Which is Better?

Keurig K-Elite Vs K-Classic: Which is Better?