While most people might be familiar with Ninja because of their famous blenders, the truth is Ninja makes many useful kitchen appliances. Among their wares, you’ll find some quality coffee machines, too.

The Ninja CE251 and CE200 are just two examples of excellent coffee maker models. On the surface, they look incredibly similar, though, so choosing between them can be impossible. We’ve created this Ninja CE251 vs CE200 comparison to make it easier for you to choose.

Here’s what we’ll cover for you:

The Ninja CE251 was clearly designed with convenience in mind. It’s a coffee maker that’s capable of making either large or small batches depending on what you need. Furthermore, this Ninja can be programmed to brew a pot for you up to 24 hours in advance. Get this one if you’re looking for an affordable household coffee maker for personal use or to share with others. 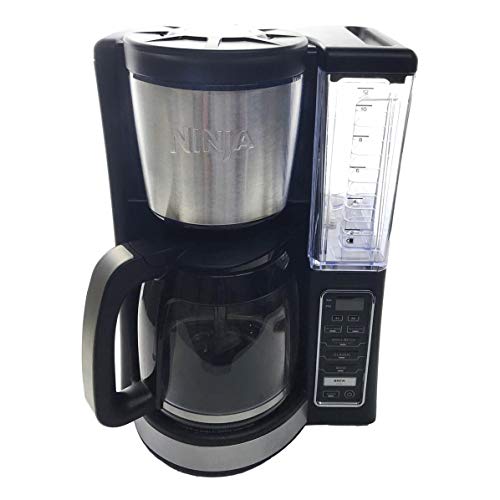 All the features you can get in the CE251, you can get in the Ninja CE200. For all intents and purposes, these coffee makers are identical, making it even more difficult to choose between them. Because of this, the CE200 is also good for people looking for a basic household coffee maker to share or brew for themselves.

Day to day, our cravings change. This concept applies to coffee, too, which can be made in countless different ways.

That’s what makes it convenient to have a coffee maker that can brew your coffee differently depending on your preferences at the time. The CE251 and CE200 both have a classic and rich brew setting.

Choose classic when you just want a basic cup of coffee. When you’re wanting something with a much more powerful flavor, choose the rich setting.

Do you find it difficult to get ready in the morning? Do your afternoons leave you craving a pick-me-up?

These Ninja coffee makers are poised to help you. They have a programmable brew setting that makes it possible to set them up to brew up to 24 hours in advance.

The possibilities with this function are endless. You can use it to have the coffee maker brew a fresh, hot pot for you before you wake up. Alternatively, you can set the Ninja to brew you a pot shortly before you come home from work or school, so that you return to a kitchen smelling like rich coffee.

When it comes to coffee makers, the carafe is one of the most important parts. It allows you to brew more or less coffee in one cycle.

In this regard, the CE251 and CE200 are exactly the same. They can both brew up to twelve cups of coffee.

That means if you’re hoping to spend a few hours savoring a carafe, or you’re planning on sharing with your family, you’ll have more than enough to do so.

Wondering how Ninja holds up when compared to other brands? Try reading our Ninja CE251 vs Cuisinart comparison to find out!

As nice as it can be to have access to large batches, sometimes you just don’t need that much. When all you want is a cup or two of coffee, brewing an entire carafe can be downright wasteful.

Fortunately, you don’t need to worry about being wasteful with the CE251 or CE200. Both have a small batch button that allows you to brew anywhere from 1-4 cups. Whether your craving is large or small, these coffee makers can satisfy it.

Unless you specifically anticipated iced coffee, you probably don’t like when your brew is cold. Most people imagine a hot, steaming, and invigorating mug when they want a coffee.

But if you brew a large pot and don’t drink it quickly enough, you’re often left dumping out leftovers or drinking the icy remains. The Ninjas can stop this from occurring, however, with their built-in warming plates.

Furthermore, you can program the warming plates to keep your coffee toasty for anywhere from 2-4 hours. This gives you as much time as you need to finish each carafe, reducing your waste.

Water is crucial to brewing all kinds of coffee. The more you have of it, the more coffee you can brew at one time. That’s why the Ninja CE251 and CE200 both have 60-ounce water tanks.

With this kind of capacity, you’ll have plenty of water to brew multiple cups in one cycle. In fact, either one of these coffee makers can brew up to 12 cups at a time.

This is ideal for serving your friends and family. You’ll truly be the host with the most with these coffee makers.

We’ve already established that the Ninja CE251 and CE200 have large water tanks. However, there’s another feature that makes them noteworthy: they’re removable.

Being able to remove the water tanks makes it easier to both refill and clean them. Rather than having to haul around the whole coffee machine whenever you need to add more water or clean the tank, you can just pull the reservoir out.

There can be inconsistencies even in a single pot of coffee. Some patches might be hotter than others, for instance, or the flavor may be spotty.

The Ninja CE251 and CE200 each have an answer for that issue: their brew-through lids with flavor straws. While you brew your coffee, the liquid is forced through a straw in the center of the lid, which circulates the brew.

In the end, it results in a carafe of fresh coffee that’s consistent in both flavor and temperature.

There are honestly no significant differences between the CE251 and CE200. The only real noticeable variation we could find is that, unlike the CE251, the CE200 is not readily available these days.

Most of the listings you can find online for it, including our own, are renewed. This means that they were used or the box was opened.

Most online vendors, including Amazon, will carefully test used products to ensure you’re getting something perfectly functional when you order something renewed. However, if you’ve got your heart set on a brand-new coffee maker, it will be far easier to find a new CE251.

Which One Should You Get?

No matter which Ninja you choose to get in this comparison, the truth is, you’ll be getting essentially the same coffee machine. For that reason, we can’t definitively tell you one is better than the other in a range of circumstances.

As we mentioned previously, the single big difference we could find is that the CE200 is not as easy to find new as the CE251 is. Thus, if you want an unused coffee machine, you’ll probably prefer to the CE251.

You can check out both these coffee machines in detail by clicking the links below:

Ninja Hot and Cold Brewed System CP301 vs CP307: Which is Better?

Ninja CE251 vs Cuisinart: Which One is Better for You?

Keurig K Duo vs Cuisinart Coffee Center: Which One Should You Choose?

Ninja Hot and Cold Brewed System vs Keurig K-Cafe: Which is Better?