I've reviewed the best decaf coffee beans, (if you must)...

There are two kinds of people in the world: those who tried and loved decaf coffee and those who haven't found a good one yet.

If you're in a hurry, below is my quick list and my favorite

What is Decaf Coffee?

Let’s get this straight: decaf coffee is not completely caffeine free.

Decaffeinated coffee is a particular type of coffee that has at least 97% caffeine removed from the coffee beans in order for it to be called decaf by the FDA.

Beans get decaffeinated before roasting and grinding. Water, organic solvents and carbon dioxide are used to remove coffee from the beans. The beans are soaked in the solvent until the caffeine is extracted.

Next, the solvent is removed from the beans.

Like many great things, decaf coffee was invented accidentally. In 1903, a German Merchant Ludwig Roselius realized that his freight of coffee beans lost caffeine after the beans soaked in seawater during transportation.

What could have been a tragedy for the business turned to be a commercial success for Roselius. The decaf product was patented three years later.

Nowadays, decaf coffee is quite popular. Apart from caffeine content, it has the same properties and nutrients as the original coffee.

But it's taste is a bit milder as there is no caffeine bitterness. Some people enjoy decaf more for this particular reason.

Why Does Anyone Need Decaf Coffee?

Being one of the world's most popular beverages, coffee has a somewhat shady reputation when it comes to human health.

Many people around the world love the taste of coffee and the way this drink makes them feel. Yet, many think of decreasing their caffeine intake for different reasons.

Decaf coffee is a perfect alternative for people who want to keep their morning rituals and enjoy a comforting hot drink without compromising their lifestyle choices.

Decaf coffee is exactly the same coffee, but with caffeine removed. I once experimented with my friends by chance when we had a party at home.

I grabbed the wrong package and brewed decaf Lavazza lattes and Americanos for nine of my friends. Even the pickiest coffee snob in the group did not feel that something was "wrong" with her drink.

But why do people abandon caffeine at all? Different people have different reasons, including:

Some people can't have caffeine due to their health condition. Caffeine can potentially aggravate some health conditions and should be limited or given up completely in some cases.

Some people run on coffee like cars and gasoline, while others have their fingers shaking after the second cup. Too much caffeine is bad for you, but if you still crave for another cup, why not make it decaf? Also, when you crave for another cup of coffee late in the evening and know that coffee will keep you up all night, decaf might be a great idea.

Some people believe that any stimulants are not good for their body and mind. They rely on studies that show that stimulants and energy drinks drain the body’s strategic energy stocks. Some religions like The Church of Jesus Christ of Latter-day Saints do not approve of taking any stimulants, including caffeine.

Due to contradicting results of medical studies, pregnant women are advised to limit their caffeine intake to under 200 mg caffeine per day. That's about one 12 oz cup of coffee, so a lot of pregnant and nursing women choose decaf or half-caff coffee.

Is Decaf Coffee Good or Bad For You?

What Are The Advantages of Drinking Decaf Coffee?

There are many advantages of drinking decaf.

Any Reasons Not To Drink Decaf Coffee?

Decaf coffee can also be bad for you. There are a ton of questions on this topic. Here are a few things that are important to note about decaf coffee beans:

Where Can You Buy Decaf Coffee?

Decaffeinated coffee is quite popular, so it shouldn’t be a problem to get decaf coffee beans in your local grocery store. It is a mass-produced product that can be found around the world.

You will most likely be able to find a decaf option in your local coffee house as well. It’s a good idea to try a cup before buying a big package because decaf has gone through additional processing and tends to taste a little different depending on how it's made.

Major coffee brands have decaf options, and these tend to be more consistent in taste. You can find them in a supermarket, grocery store or order online. 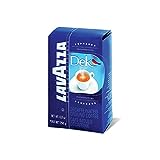 Lavazza has been the most favorite coffee in Italy for many decades. Their Lavazza Dek Ground Coffee Blend is a creamy dark espresso roast that has smooth flavor and exceptional aroma. This mix of Brazilian and Vietnamese Arabica and Robusta is decaffeinated using a natural process. This coffee is blended and roasted in Italy. Lavazza Dek ground coffee blend works best with Espresso machines. 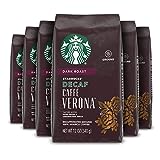 Starbucks has something special to offer to decaf coffee drinkers. Their Caffè Verona is a well-balanced and rich tasting coffee with a dark coca texture. This dark roast has traces of chocolate sweetness in it.

This is an organic decaf whole-bean coffee, roasted dark to deliver the best flavor and taste in every cup. With decaf Kicking Horse Coffee, you get deep, dark and delicious taste without compromising your health or lifestyle choices. This coffee is grown in Central and South America in a socially and environmentally friendly way.

This organic fair trade coffee is created by mothers and for mothers. Low acidity and minimum caffeine content make this coffee a good no-guilt drink for all stages of motherhood, from planning to breastfeeding. This coffee is grown and processed without any harmful substances added. 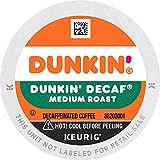 This original blend decaf coffee comes in K-Cup Pods that are perfect for your Keurig machine. With this decaf Arabic, you get the original Dunkin' Donuts coffee taste and flavor without having to betray your lifestyle or health choices. This is a medium roasted coffee that has the smooth original taste of Dunkin' Donuts coffee.

Lavazza Dek Ground Coffee Blend is my top pick when it comes to decaf coffee. Having tried decafs from different brands I always return to Lavazza. It has the most smooth and reach taste and flavor of original Lavazza coffee. What I appreciate the most, it does not give you any hints that it's decaf. Lavazza is easy to find practically in any supermarket and the price does not bite, especially if you come upon a good offer. What's more, Lavazza takes great care about the safety of their products, so you can be sure there are no harmful chemicals in your cup.