Home » Espresso Machine Parts » What is an Espresso Tamper? Plus the 6 Main Tamper Types

Either way, you're in the right place. 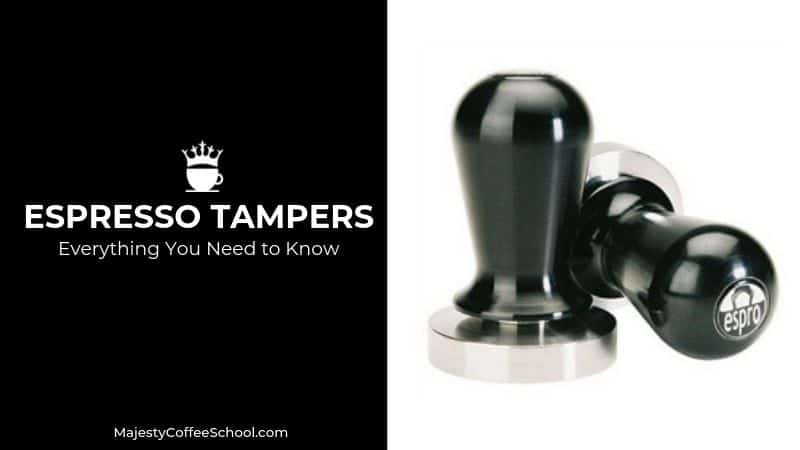 In this short guide, we'll break down...

What is an Espresso Tamper?

An espresso tamper is a plunger-looking device that's used to lightly pack or "tamp" for short the coffee grounds into the espresso machine's portafilter. They two main parts are the handle and the base. The base being the portion that comes in contact with the espresso grinds during the tamping process.

Why Tamping Your Espresso is Important

The process of making espresso in it's most simple form is water running through ground coffee beans.

If the water runs through the grounds too quickly from the grounds being loosely tamped, it won't extract any espresso or the final shot will come out watered down.

On the other hand, if the espresso grounds are packed too tightly, water flow is impeded resulting in a bitter shot from a long extraction time. Even worse, the water may not even make it through the grinds.

Getting an uneven tamp can cause problems as well. It will cause the water to move quicker to one side than the other resulting in an uneven extraction of your ground beans. It can also result in channeling.

The tamper is main tool that the barista has at their disposal to make sure that the grounds are packed correctly. Along with grind coarseness, the tamp is the other major variable in the equation of making a consistent and delicious espresso shot.

As mentioned previously, a flat tamper is the style you'll usually see (with a flat base) while the convex tampers come to a point in the middle of the base. Which style is better than another remains a highly debated subject. According to the linked poll, a 48% majority of users preferred the convex style. This was mainly because they felt they had a lower tendency to create an uneven tamp and thus have less channeling.

At the end of the day, it comes down to personal preference and what's easier for you to get an even tamp. Granted, using a convex tamper will never result in a tamp that's truly "even" because the sides will be pushed up.

Other Considerations When Buying a Tamper

Where to Buy Espresso Tampers

Now that you understand the basics of espresso tampers, you're probably wondering where you can get one.

Well, if you don't have a machine already, know that there should be one included in whichever model you buy.

If you're looking to buy a new one, be sure to check out our selection at Majesty Coffee.

If you want to check out tampers themselves, than Chris Coffee has a great selection.